You will pay 0 Stamp duty

How this was calculated:

You will pay 0 Stamp duty.

How this was calculated:

A Grade 11 Listed two bedroom end terrace cottage, in a quiet setting close to the local church and school. Lots of character with a long rear garden and store. SECTION 157 OF THE HOUSING ACT 1985 To purchase this property you must have lived or worked in Devon for the three years prior to purchase.

SECTION 157 OF THE HOUSING ACT 1985 To purchase this property you must have lived or worked in Devon for the three years prior to purchase. RIGHT OF WAY The neighbouring cottages enjoy a pedestrian right of way across the rear garden and down the side of the property.

Tenure The property is held on a 999year lease dated from 25th March 1959. Directional note From Budleigh Salterton head North on the East Budleigh Road/B3178. Continue on the main road through East Budleigh turning right at the signpost for Otterton. When entering the village turn right immediately just past Otterton Mill onto Church Hill which is also signposted to the school. This property will then be found set back on the left hand side behind the war memorial and close to the church.

Details of Grade 11 Listing (Date First Listed: 30th June 1961) OTTERTON CHURCH HILL, Otterton SY 0885 7/145 Nos. 1, 2, 3 and 4 St Michaels Close (formerly listed as The 30.6.61 Priory) GV II Almhouses, former manor house built on monastic site. Early or mid C16, some C18 improvements, radically altered and rearranged in late C19 and again circa 1970. Roughly-squared stone blocks, mostly local conglomerate sandstone but including some of other sandstones and some volcanic trap; Beerstone ashlar detail; stone rubble and brick stacks topped with late C19 brick; slate roof. 4 adjoining cottage almshouses facing west. Nos.1 and 2 are at the left (northern) end and each is 1 room wide a 2 deep and there is an axial stack between the two. Nos. 3 and 4 are 2-room plan cottages served by an axial and 2 gable end stacks at the right (southern) end. No. 3 occupies the front rooms and its doorway is through a 2-storey porch slightly right of centre of the whole block. No. 4 occupies rear rooms and is entered through the back. 2:1:3-window front. Nos. 1 and 2 to left of the porch have 1 window each, all circa 1970 casements without glazing bars and with concrete lintels. Either end of this section are contemporary part-glazed doors. The masonry here is random rubble and has been much disturbed in the C19 and C20. The gabled porch outer arch is a richly-moulded Beerstone four-centred arch. Inside is a moulded cornice. There is a C20 front door into No.3. Directly above the outer arch is a Beerstone plaque. Here set between pilasters and below a moulded entablature is an heraldic achievement in bas relief; the arms of William Duke (mayor of Exeter in 1460) quartered with those of Cecily Poer. Above this is a C20 mullion-and-transom window under a probably C18 Beerstone flat arch with keystone. There are blocked windows each side of the porch and in the angle between porch and main block right is what appears to be part of a disused first floor chimney stack. Most of the 3-window section right of the porch contains C16 2- and 3-light limestone windows with 3- centred heads to the lights and sunken spandrels. The ground floor centre and right windows are timber casements with flat-faced mullions, possibly as early as the C18. All these contain timber casements and rectangular panes of leaded glass. The roof is gable-ended. All the gables, including that of the porch, have shaped kneelers, coping and stone finials. The north end, overlooking Otterton village, contains a blocked window on each floor; a massive 4-light mullion-and-transom window to the ground floor and a 2-light first floor window. All the lights have 3-centred heads with sunken spandrels and both windows have hoodmoulds. The windows look C16 but are built of a different limestone to those on the main front. The rear elevation is plastered and contains only circa 1970 fenestration. The right (southern) end is blind. Here, however, the lower section of the rear chimney shaft is limestone ashlar. Interior: Nothing shows earlier than the late C19 and most detail dates from circa 1970. Roof not accessible but is believed to date from late C19 or C20. Some early features may survive behind later plaster and there is a tradition in the village of a blocked cellar under the south end with stone doorways. Although the arms seem to date from the late C15 it is thought that this building was erected after the dissolution of the monastery here in the C16. The surviving detail would support a C16 rather than C15 date. Listing NGR: SY0800885187 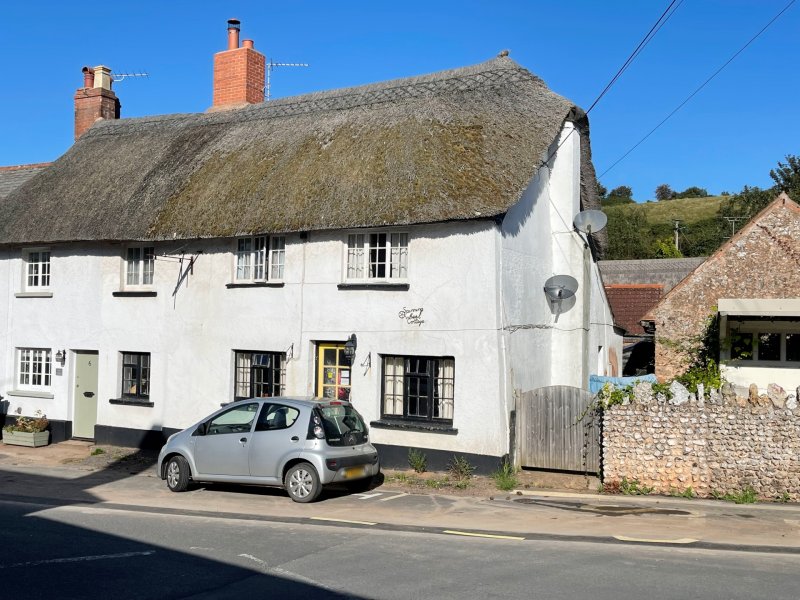